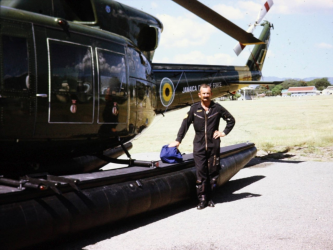 It is with deep sorrow the family of Lawrence F. O’Brien of Bridgewater N.S. announce the passing of there father, grandfather, and great grandfather, at the age of 90 years. Larry passed peacefully with his three sons at his side at Dartmouth General Hospital. Larry served in the Canadian Armed Forces for 26 yrs. and served as a heavy recovery mechanic with the Royal Canadian Electrical Mechanical Engineers(RCEME) in the Korean War and later as an Aviation Technician maintaining helicopters where he was chosen as one of the crew to travel to Jamaica to train the Jamaican Defence Force on the maintenance of their helicopters. He was an avid sailor who enjoyed a memorable year long adventure with his good friend Cal solo sailing their vessels from Barrie, Ontario’s Kempenfelt Bay to Florida and across to Cuba when in his 60s.
Larry is predeceased by his wife Doreen E. O’Brien (nee Graves), father Wylie O’Brien, mother Lillian Telfer (nee Langille) and step father Donald Telfer.
Larry is survived by his three sons, James C. O’Brien (Amherstburg, Ontario), Michael H. O’Brien (Cold Lake, Alta.) Patrick K. O’Brien (Minesing, Ontario).
He is the proud grandfather of five grand children and six great grand children.
Larry will be greatly missed by his family and friends. Special thanks to the staff at Dartmouth General for making dads final days as comfortable as possible. His family is comforted in knowing Dad/Grampa is now with his dear wife Doreen and catching up on lost time.
We love you and will always miss you.

In keeping with Dad’s wishes, cremation has taken place and there will be a celebration of life to take place in the summer of 2023 with his sons and his closest friends, in his beloved home town of Bridgewater, Nova Scotia.

Arrangements have been entrusted to the R.A. Corkum Funeral Home, Wileville, where on-line condolences may be made by visiting www.corkumfuneralhome.ca