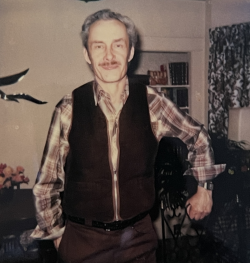 Alfred grew up in Northwest and settled down with his wife Isabelle in Conquerall Bank where they raised their family. He spent most of his working life at the Bridgewater Bulletin where he worked in advertising production.

He enjoyed talking to people and always had a story to tell when you met him. He loved nothing more than to sit down with a home rolled cigarette in his mouth and spin a yarn.

As a younger man he spent many hours working on cars, both for himself, his boys and friends. Alfred was the go-to guy if you had a car issue. He took pride in tuning cars to precision.

Not only was he very talented when it came to cars, he could fix pretty much anything. He didn’t like to throw many things away and would come up with many unique ways to conjure things together.

He spent many hours in his basement workshop making wooden carvings and tinkering. He also had quite the collection of homemade tools and carvings. He was also known to use a few choice words when things weren’t working in his favour.

He had many fond memories of summer trips to Bangor. He and his family would pile into the old Dodge Monaco early in the morning and head out for the much anticipated summer shopping excursion. The family would return a week or so later with the car overflowing with tons of great finds.

He was a family man and enjoyed spending time with his wife, his sons, grand children, and grand dog. He loved being a frequent "taxi" driver for his grandchildren and hanging out his grand dog.

We cherish our memories of Dad and Gramp and he will be greatly missed.

We would like to express our sincere appreciation and gratitude to the staff at Harbour View Haven and to Dr. Kelly who provided Dad with excellent care.

There will be no visitation or service by request. Memorial donations may be made to Harbour View Haven Home for Special Care, Lunenburg.

Arrangements are under the direction of the R.A. Corkum Funeral Home, Wileville, where on-line condolences may be made by visiting www.corkumfuneralhome.ca