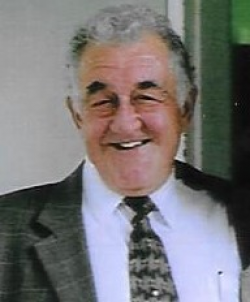 Charles St. Clair Murphy- 87, passed away on August 5, 2022 in Queen’s General Hospital, in Liverpool. Born in Northwest Cove, Nova Scotia, he was the son of the late Borden and Margaret (McCready) Murphy. Charles worked at an early age in the fishing industry, working for his father and uncles. He moved out to Ontario to work in the nickel mines then the railways. Being a self taught mechanic, Charles moved back to Nova Scotia, received his mechanics licence, started up his own service station, Murphy’s Texaco and operated it for many years. In his later years, he helped manage the service station in Blockhouse then continued being a business owner with B&N Windows and Doors. He finished his working career with Bluenose RV Center and then retired to help care for his wife.
Charles loved watching documentaries, fishing, hunting, reading and going for drives to the beach. He was a faithful member of the Kingdom Hall of Jehovah’s Witnesses, Cookville and then New Germany. He really enjoyed baking. Those who knew Charles would have tried his carrot cakes as he was always making them and taking them to gatherings. He always had time for a cup of coffee and company whenever someone asked.
Besides his parents, he was predeceased by his wife Linda and brothers Raymond and Alan. Charles is survived by his 6 children, Laura (Richard) Fancey, Nancy (Gary) Murphy, Lisa (Chris) Mahaney, Peter (Vicky) Murphy, Jolene (Ronald) Brooks and step son Charles (Lynch); 14 grandchildren; 5 great grandchildren and a niece and nephew.
A memorial service will be held 2:00pm Saturday Sept 3, 2022  at the Kingdom Hall of Jehovah’s Witnesses, 14 Faulkenham Lane, New Germany. Zoom Link is posted below so that those wishing to watch from home are able to take part. Flowers will be accepted. Memorial donations may be made to a charity of your choice. Arrangements are under the direction of the R.A. Corkum Funeral Home, Wileville, where on-line condolences may be made by visiting www.corkumfuneralhome.ca