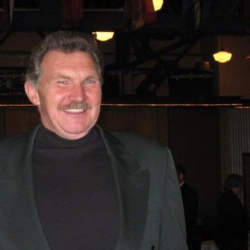 Barkhouse, Ira Moody – Age 70 of Middle Cornwall, passed away peacefully at home on Sunday, January 9, with his family by his side. Born on January 5, 1952, in Middle Cornwall, he was a son of the late Moody and Lucy Barkhouse. Ira is survived by his wife of 45 years, Doris; daughters, Tina (Chris), Italy Cross, Amanda (Byron), Middle Cornwall; brother, Brydon (Muriel), Cornwall, twin sister, Irene (John), Halifax; grandchildren, Jess (Devin), Mount Uniacke, Sam (Ellis), Halifax, and Dominic, Middle Cornwall, and many nieces and nephews.
Ira was predeceased by his sister, Ruby, and brothers-in-law Ralph, Mervin, Bruce, and nephew Denny.
Ira was a founding member of the Cornwall and District Fire Department, and a member of the Cornwall Baptist Church. He was well known for his welding skills, kindness, sense of humour and willingness to help those in need. In 2008, he received the province’s inaugural Medal of Bravery from Premier Rodney MacDonald for helping to save a man’s life, and was one of few people invited to meet the Queen of England when she visited Halifax.
He started his working career at Bruhm’s Mill in Middle Cornwall when he was 12, along with working in the woods. He then went to work at Halifax Shipyard as a welder and then Bowater Mersey cutting wood. He did carpenter work with LB Construction in Bedford and MacFarlane Brothers in Colby Village. He made his first and last trip scallop fishing to buy Doris’ engagement ring. He then joined Farmer’s Dairy as a milkman, and then Balcome’s Metal Works. He spent some time working with County Masonry before joining the Department of Transportation as a Supervisor. He ended his career welding for Bernard L Mailman Projects Ltd. After working during the day at these places, he would come home, and then go to work in his garage under I & D Welding and Metal Works.
Special thanks to the staff on floor 8A and B at the QEII and Ambulatory Care at South Shore Regional Hospital.

A celebration of Ira’s life will be held at a later date. Donations in Ira’s memory may be made to the Cornwall and District Fire Department, New Cornwall Memorial Gardens or any charity of choice.
Arrangements are under the direction of the R.A. Corkum Funeral Home, Wileville, where on-line condolences may be made by visiting www.corkumfuneralhome.ca