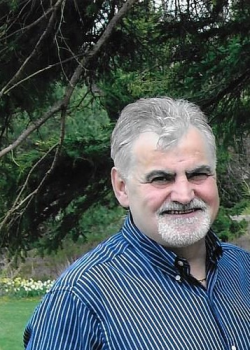 A lifelong host who loved to cook and entertain, Joseph (Melvin) Benoit was born in 1959 in Marches Point Newfoundland, to parents Georgina and Patrick. Melvin had a zest for life and adventure which allowed him to live all over Canada. He looked back fondly of his time in British Columbia where he had his two children Joshua Benoit and Sasha Benoit-Caines. Most notably Melvin remembers many days at the beach "watching" his kids swim while he rested his eyes, and taking them on many adventures like a two-day hike along the beach.

Melvin loved to be surrounded by people and enjoying his favourite past times. He cherished the time on the golf course and took any opportunity he could to fly fishing with his close friends. To say Melvin was a social butterfly would be an understatement, he seemed to make friends wherever he was. He had an infectious personality that people gravitated too.

When Melvin was not cooking, golfing or fishing he was working at a job he loved. He was a valued member of the CKBW sales department for many years. He definitely had the gift to gab and made a career out of it.

Melvin was a sports enthusiast who loved to watch hockey and football. However, his favourite sports were anything his children were playing. To put it lightly he was a sports-dad, which often rivalled the hockey-moms. He may have got his children benched a time or two because he was coaching them from the sidelines.

Melvin was a giver and took any opportunity he could to help others in the community. He devoted a lot of time helping the Legion and the Rose Fund. When he got behind a cause he jumped in with both feet and would let nothing stop him.

Melvin is survived by, mother (Georgina Ranger), siblings (Madonna, Patrick, Bertha, Chris, and Liz), Children (Joshua Benoit and Sasha Benoit-Caines) and Grandchildren (Elliot and Addison Caines). Pre-deceased: Patrick Benoit Sr. (father), Richard Ranger (Step Father), and Nancy (sister). In place of flowers, the family requests that donations be made in Melvin’s honour to the Rose Fund, a local charity that was near and dear to his heart.

A celebration of his life will be held in the spring.