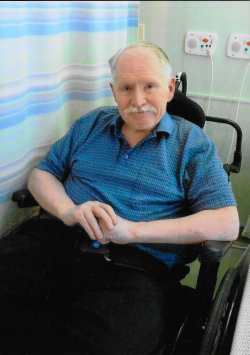 David LeRoy Haughn of Lunenburg, NS passed away with his wife of 54 years, Irma (Smith) Haughn by his side, on September 10, 2021 in Mahone Nursing Home, Mahone Bay, NS.
He was born on December 22, 1943 in Bridgewater, NS and was the son of the late Warren and Jewell(Selig) Haughn, Oakhill, NS.
David and Irma were married on September 17, 1966 in Woodstock, Ontario.
Returning home in 1974, he began a Janitorial business and at times helped his dad do some electrical work. He was a very active person and enjoyed music which he did for a while as a DJ, doing weddings and banquets. As for those who knew him, he really liked to dance, and almost always he and his sister would have a ballroom waltz. When little grandchildren came along he used to take Angelic and Brandon for a ride in the wagon behind the lawn mower, all around the field.
Some of his fondest memories were helping at the local Kingdom Hall of Jehovah’s Witnesses, doing sound, or helping at Assemblies or Conventions.
He is survived by his sister Dawn (Jim Woolner), Oakhill, NS, and will be sadly missed by his two sons Dean (Cynthia), Hamilton, ON and Darren, Lunenburg, NS; three grandchildren, Angelic (Ryan), Molega, NS, Brandon, Auburndale, NS and Nolan, Lunenburg, NS; nieces Natalie Woolner, Oakhill, NS, Doreen Handley, Middleton, NS; nephews Ron Veinot, Middleton, Danny Veinot (Tasha) Torbrooke, and many cousins. He was predeceased by niece Kim Veinot, Bloomington, NS.
Memorial service will be held via ZOOM with the date and time to be announced. Memorial donations may be made to World Wide Work of Jehovah’s Witnesses or a charity of choice. Arrangements are under the direction of the R.A. Corkum Funeral Home, Wileville, where on-line condolences may be made by visiting www.corkumfuneralhome.ca