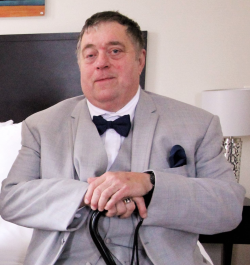 Charles Richard Birkett Sloat – Lower Cornwall, NS. It is with great sadness that the family of Charles announce his sudden passing on September 1st, 2021, at the age of 67. Charles was born November 23rd, 1953 in Ottawa, ON to parents Richard and Ruby (Barteaux). At a young age he moved to Saint John, New Brunswick where he spent his childhood. In 1974, he married the love of his life, Diane. After a few years they relocated to the South Shore of Nova Scotia but they both always called New Brunswick home. During his earlier years of living in Lower Cornwall, he was a volunteer fire fighter for the Cornwall and District Fire Department.
Charles spent the earlier part of his career at sea working on tug boats and on numerous Coast Guard ships. He took a short retirement due to some health concerns, then in his mid-40s, obtained his class 1 license and began truck driving. He loved travelling all over North America and seeing new places. Nothing he loved more than to come home and tell stories of his travels and even more stories of the not-so-great drivers he encountered.
Charles was known throughout his life for his sense of humour and mischievous ways. He loved to prank people and play practical jokes and was always willing to tell you a story whether you asked to hear it or not. In recent years he enjoyed keeping us all up to date with the most recent weather reports and his colourful views of the political world.
Charles is survived by his sons Theodore of Grand Prairie, AL; Willis of Piney, MB; and daughter Kathleen (Abdel) of Cole Harbour, NS; and also, grandchildren Tehya and Jonah of Cole Harbour, NS. Charles is also survived by sister-in-law Barbara (Robert) Dryden of Saint John, NB; Jean Washburn of Wirral, NB; Sheila Washburn of St. Andrew’s, NB; and brother in-law, David (Anna) Washburn of Wirral, NB. He is also survived by several nieces and nephews. Charles was particularly close to his nephew David (Lisa) Magee of Smiths Falls, ON. He was predeceased by his parents Richard and Ruby; his beloved wife Diane (Washburn); step-father Robert Gillingham; step-brother Charles Gillingham; sister-in-law Audrey Magee; and brothers-in-law Larry Washburn, Owen Washburn and Doug Magee.
Cremation has already taken place and there will be no service at this time. In memory of Charles, the family is asking that in lieu of flowers, donations be made to the Cornwall and District Fire Department.
Charles is now reunited with his love, Diane, and they’re drinking coffee and laughing together, while he’s telling her 8 years of untold stories.
Arrangements are under the direction of the R.A. Corkum Funeral Home, where on-line condolences may be made by visiting www.corkumfuneralhome.ca