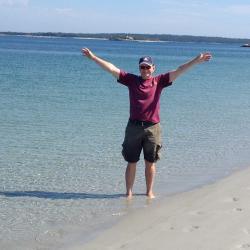 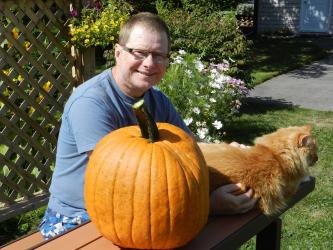 Molnar, Leslie(Les) Joseph
It is with great sadness we announce the passing of Les Molnar, loving husband of Catherine (Cathy) Cruz on April 12, 2021 in Western Shore, Nova Scotia at age 64.
Les was born September 4, 1956 in Toronto, ON to parents Sadie Euphemia McDonald and Leslie Molnar Sn. He grew up in a downtown Toronto neighbourhood near Bathurst and Bloor Street, where he attended grade school and St. Michaels High School.  Les loved learning and studied at Guelph University, graduating with a BA in History in 1979.  Soon after he moved to Calgary, AB and pursued a career in retail sales. His lifelong quest for knowledge stayed with him and over the years, he became the one to beat at Trivial Pursuit.
Les and Cathy met in Calgary in 1993, a meeting that might be described as love at first sight. She was the love of his life and they married on September 20, 2003.  In 2007 they moved their home to Western Shore, NS where Les continued his work in retail and Cathy advanced her career in computer network management. Following his retirement, Les volunteered at South Shore Regional Hospital in Bridgewater and took great pride in maintaining and improving the home they lived in, overlooking the beautiful Mahone Bay.
Les loved life and will be remembered by his lifelong friend Patrick Collins, Jim O’Keefe, Mary Ross, his cousins Anna and Roger Davison, Cathy's family, Donna and Cam Larocque and his feline buddy and confidante, Mr. T.
A Celebration of Life and Interment will take place at a later date due to COVID-19 restrictions.
In lieu of flowers, the family is requesting that donations be made to South Shore Regional Hospital Foundation, Volunteer Department. Arrangements are under the direction of the R.A. Corkum Funeral Home, Wileville, where on-line condolences may be made by visiting www.corkumfuneralhome.ca