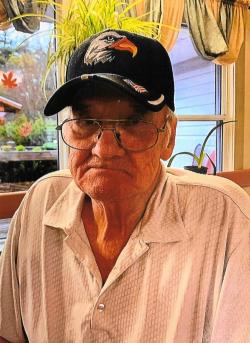 Edward Richard Bruhm, born March 12, 1940 passed away peacefully on February 18, 2021, in Hillside Pines with his loving wife of 58 years, Joyce (Feener), devoted daughter and caregiver Darlene Bruhm and granddaughter Tiffany Bruhm by his side.
Born in West Northfield, Edward was a son of the late Locke and Florence (Cross) Bruhm.
Edward is survived by his 6 children, 31 grandchildren and 18 great grandchildren: Richard (Cathy) Bruhm, grandchildren Haley, Cassandra, Candace Bruhm of Mahone Bay; Gregory (Terry) Bruhm, grandchildren Shane, Dakota, Morgan of Bridgewater, Cheyenne Robinson, Chevelle Robinson, Nakita, Teagan, Shiloh, of Manitoba; Brian (Angie) Bruhm, grandchildren Holly MacGregor, Angeline, Joshua, Gabriel Bruhm of Bridgewater, Joshua VanDerVennet, Dwayne Napper, Cade, Courtney, Cheridan Bruhm of Manitoba; Diane Becks, grandchildren Corey Moore, Kody Jefferson, Brandon Goodwin, Chantelle Becks, Spencer Becks, all of Halifax; Darlene Bruhm (Johnny), grandchildren Dustin Durling (Mya) of Middleton, LaKeesha Durling of Alberta, Kurstin Cook (Zachery) of Bridgewater, Faith Bruhm (Tyler) of Mahone Bay; Christine Bruhm of British Columbia, grandchild Tiffany Bruhm of Bridgewater; great grandchildren, Jayce, Jealyn, Keyan, Taylah, Treyvonte, DeAndre, Shamar, Reina, Jorja, Jordan, Olivia, Emma, Malayah, Presley, Koden, Azlyn, Chase and Keyan; numerous nieces and nephews.
He was the last surviving sibling of sisters Mildred Bruhm, Blue Rocks, and Ruth Hill, Bridgewater; brothers Guy Bruhm, Stanley Bruhm and Douglas Bruhm, all of West Northfield. He was also predeceased by grandson Daden Bruhm (1999-2013) of Manitoba.
Dad married our Mom Joyce, 58 years ago and started what is now a huge family. He went on to take a mechanics, welders fabrication course and became an outstanding mechanic. He worked at Riverport Fish Plant for many years. There wasn’t a mechanical question or problem that man couldn’t figure out. There wasn’t anytime in his busy life that anyone would call on him night and day that he would never turn down to help. Dad loved being full of grease. We wouldn’t have him any other way. His heaven was his tools, cars, trucks and his family. He raised his family on his salvage yard in Crouses Settlement. Our dad loved all his family and anyone we kids dragged home. He had more kids than he ever could know what to do with and although he was not a rich man, he gave his all to his children and every kid that ever stayed with us became on of the family. As the years went by he became very tired of always working and mom and dad moved on as we kids grew and went out on our own. They settled in Bridgewater then later bought another home in Upper Branch where he continued to tinker with any vehicle he could. Later on, he started getting into woodwork. Some of his woodwork ins displayed in a Bed and Breakfast in Newfoundland, which made dad so proud. With age, mom became ill and resided in a Nursing Home. Dad remained in their home for a year until his health took over. Dad was diagnosed with Cancer in November 2019 and ended up in the hospital for months until he finally got his last wish- to be with his wife. Dad passed away peacefully beside the woman he loved dearly for 58 years.

Our Father, Our Dad

A huge thank you to Sandra MacGregor for the love and care you gave to our dad. You will always be a daughter to dad. XO and also a big thank you to all the staff at Hillside Pines, South Shore Regional Hospital, Fishermen’s Memorial Hospital for the excellent care you gave our dad.
There will be no funeral at this time. There will be a Celebration of Life for dad in July. Memorial donations may be made to the Canadian Cancer Society. Arrangements are under the direction of the R.A. Corkum Funeral Home, Wileville, where on-line condolences may be made by visiting www.corkumfuneralhome.ca