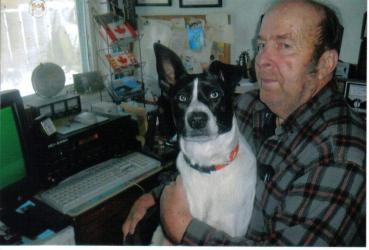 George Winston Wessell was born May 14, 1941 Bridgewater,NS died suddenly on November 3, 2020.   Although he had not been in good health for several years his death came as a shock to his family,friends & the community.  He was the son of the late George H. & Princetta (Crouse) Wessell and lived most of his life on the family homestead in East Clifford. Besides his parents he was predeceased by brothers:  Chester, Maxwell & Kenneth. He is survived by his Wife of 33 years Pauline A. Kempton (nee Baker); Sister Beatrice  & husband Andrew Ernst & niece Sherry.
He attended East Clifford & West Clifford schools. He went to work in the Christmas tree industry and loading lumber boats, cutting out the power lines in East River, Acadia Construction, working his way up to being a crusher operator, worked at the construction of Michelin Bridgewater. He picked tobacco in Rodney, Ontario. He spent 11 years working in the deep sea fishing industry out of Riverport Seafood’s on various boats and loved to tell stories, including working upon the ships which carried scientists from the Bedford Institute where he  would be gone for months in advance. Afterwards he worked on his own in the woods..
Around this time was when he started his hobby of the C.B. radio which in turn brought he and his future wife Pauline together.  He belonged to radio clubs around the world ....and then after years of working towards getting  the qualifications, he became a member of the Alfa Tango Radio Group out of Asti, Italy in 1996 he got the position of Director of Nova Scotia.  His other hobbies included stamp collecting, genealogy, hunting, fishing.
In later years he worked in various lumber mills, Christmas tree companies.  He was every community involved ...being a director of the Baker Settlement Cemetery Association...& the Baker Settlement & District Community Association... He enjoyed attending the Monday night Music Jams and the Variety Shows and helped with what he could due to help.  He enjoyed the history of the area and with the help of Pauline ..they gathered many antiques and old things  as well as information on the families of the district .....and hoped to share this information with the community.
He & Pauline spent several years as foster parents.  Besides the people who meant  so much to him....were his canine companions over the years: Brutus ,Trapper, Rebel ,Roxie & Chance. He was one of the Blue Jays greatest fans  ..and also enjoyed the Curse of Oak Island ,UFC ,Antique Road Show, Rust Valley Restorers to name such a few.  He was always interested in science....and was amazed when he found out the one of his American relatives was a contributor to the International Space Station.
A graveside service will be held 1:00pm  September 15, 2021 in Baker Settlement Cemetery.   Donations in George's memory may be made to the Baker Settlement Cemetery Association  or the Baker Settlement & District Community Hall Association. Arrangements are under the direction of the R.A. Corkum Funeral Home, Wileville, where on-line condolences may be made by visiting www.corkumfuneralhome.ca