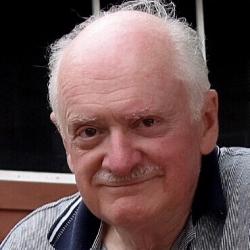 BENNETT, Geoffrey Bransom- age 87 of Bridgewater, died September 30, 2018 in Fisherman’s Memorial Hospital, Lunenburg. Born in Hampshire, England, Geoff immigrated to Canada in 1957, beginning his career as a pilot in the RCAF. Although trained as an architect, his love of flying eventually took hold. His military postings too him to Trenton, Moose Jaw, Winnipeg, Greenwood and Summerside accompanied by his wife Joan, and their five children. Upon retiring from the Air Force, he joined Transport Canada in Moncton, where he was Aviation Safety Officer for the Atlantic Region. Eventually, he and Joan retired to the Bridgewater area. He was free to dedicate fulltime to his lifelong passion for painting and drawing, especially aviation art. His art, executed with great precision and attention to detail, can be found around the world with notable collections in Greenwood, NS Shearwater, NS and Summerside PEI. He is recognized as one of Canada’s finest aviation artists. Geoff was predeceased by his parents, William Harry "Bill" Bennett and Alice Mary "Mollie" Bennett (nee Bransom), both from England. He is survived by his wife, Joan Fraser Bennett (nee Dickie); sisters Judith Wilkins (Poole, England) and Nancy Bennett (Hawkhurst, England). He also leaves to mourn his five children, Frances, Bridgewater, Jim (Terry), Long Creek, PEI, Andrew (Rhonda), Sault Ste. Marie ON, Richard (Phyllis), Middleton NS, Dave, Albury Australia. He is also survived by grandchildren Stephanie, Melissa, Alex, Dominique, William, Pauline, Ian, Mark and Stephen; great-grandchildren Devon and Lauren; nephews Stephen (Uraiwan). Along with his artistic endeavours, Geoff was active with several community groups, including Kiwanis (He co founded Senior Wheels), South Shore Health Board, and DesBrisay Museum Board. There will be no visitation or service, but rather a Celebration of his life in June 2019. Memorial donations may be made to Senior Wheels or the charity of your choice. Arrangements are entrusted to R.A. Corkum Funeral Home, Wileville, where on-line condolences may be made by visiting www.corkumfuneralhome.ca