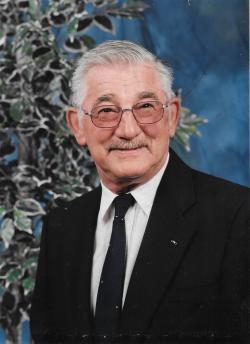 CORKUM, Elliott James 81 of Upper Northfield, passed away peacefully on May 13, 2020 in South Shore Regional Hospital, Bridgewater, with his wife Joan by his side. Born on May 21, 1938 in Pleasantville, and later moved to Mount Pleasant, where he grew up. He was a son of the late Manson and Clara (Baker) Corkum. Elliott began working at a young age in the woods and at Himmelman Farms. At the age of 17, he embarked on a seafaring career on the oil tankers in the Great Lakes. He returned home to work various jobs around Lunenburg County before beginning his career as second mate with Imperial Oil. While with Imperial Oil, he sailed on numerous oil tankers, again, around the Great Lakes, as well as many trips to the Arctic. Most notably, he was on board the Imperial Bedford when they brought their first load of crude oil out of the Arctic. After retirement from Imperial Oil, Elliott devoted much of his time to Community involvement and volunteering. He was a long-time member of The Lodge (Maplewood and then Petite Riviere), as well as the Bridgewater and Area Lions Club, serving as Club President twice. He was a familiar face around town Fundraising, as well as at local events and parades as he drove the Lions Train for Children. His kind and generous nature was unwavering. He was always willing to lend a helping hand to anyone in need. Elliott always enjoyed his camping trips throughout the years, surrounded by family and friends. He developed a love of cars at an early age and was always up for a good road trip. This led to the purchase of his motor homes, which he enjoyed numerous trips to the United States, Cape Breton and PEI, to name a few. The past years he gave up his road trips for enjoyment closer to home. He and Joan enjoyed attending local Jam sessions, as well as their Friday night card games with good friends Lloyd and Darlene Slauenwhite. It is rumoured that the girls may have accused Elliott and Lloyd of cheating a few times, but the boys have never admitted to this. Elliott was always first to jump in and help others. He never shyed away from doing what needed to be done. His big smile and caring ways will be missed by many. Elliott is survived by his wife of 58 years, Joan (Crouse); daughter Michelle Corkum (Neil Hirtle), Bridgewater; granddaughter Ashley Craig, Lower Sackville; grandson Chad Craig, Upper Northfield; sister Reta Oickle, Petite Riviere; brother Ronald Corkum, West Lahave, as well as numerous nieces and nephews. He was predeceased by his sisters Brenda Corkum and Ruthie Smith; niece Lisa Smith. A private family interment will be held in Hillside Cemetery, Upper Northfield.  In lieu of flowers, memorial donations may be made to Mount Calvary Lutheran Church or the Charity of your choice. Arrangements are entrusted to R.A. Corkum Funeral Home, Wileville, where on-line condolences may be made by visiting www.corkumfuneralhome.ca