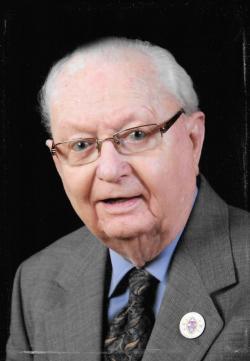 Lowe, Robert Anderson - Robert "Bob", 92, passed away peacefully surrounded by those who love him on Sunday, December 15, 2019, at South Shore Regional Hospital. Born in Bridgewater, he was the only son of Clarence and Mary (Weinacht) Lowe, Branch LaHave. Bob is survived by his wife Greta Victoria (Ramey) Lowe.

Bob met the love of his life when he was 19, and she 15. There was no doubt that they would marry, but Greta's mother asked they wait until Greta was 21. On June 19, 1952, they were married and have lived and loved together for 67 years.

Bob and Greta loved to travel, spending many winters in their motorhome in Florida and many summers in the cabin they built together on Big Mushamush Lake. They loved attending bluegrass festivals and made many amazing friendships and memories. Together Bob and Greta created and developed the Victoria Acres housing subdivision in West Northfield, Lunenburg County.

Bob always showed great interest in his community and in 1946 he spearheaded the building of the Branch LaHave Community Hall, at the tender age of 19. The following year, Bob was initiated into the I. O. O. F. LaHave Lodge #60 and steered the sale of the property when the lodge was closed in 2008. He was an electrician by trade and had his own electrical business for several years. As well as being an electrician, Bob also had a career in salesmanship. He was the Insurance Representative for Confederation Life Insurance Company before his long-term employment with Acadia Broadcasting Company in Sales and Administration, a company in which he would later become one of three owning partners.

Bob created the desire and need for a South Shore radio broadcast to serve all three counties, Lunenburg, Queens and Shelburne. Along with his two CKBW partners, this desire and need was met and continues to serve these counties today. While working at CKBW in 1969, one of Bob’s greatest accomplishments came when he was appointed to the Bridgewater Development Commission (formerly known as the Industrial Commission). During his 20 years as a member (four of which were spent serving as Chairman of the organization) Bob was instrumental in the introduction and development of the Michelin Tire Manufacturing Company in Bridgewater. During his time with Development Commission, Bob played an integral role in the purchasing of land for the South Shore Regional Hospital.

A pillar of his community, Bob served and volunteered on many boards and committees, including five years as President of the Bridgewater Board of Trade and Chamber of Commerce, Board Member of Directors of Lunenburg County VON, Area Representative for the IWK, Director of South Shore Tourist Association, Board Member of Tourism Nova Scotia, Committee Chairman of Canadian Advertising Sales Club Nova Scotia, and Volunteer Member of the Brookside Cemetery Commission. In 1990 Bob received the Provincial Volunteer of the Year Award, honouring his hard work and dedication.

Another of Bob’s passions was the Bridgewater United Church, where he served on many of the committees and played an active role in the construction of the new church.

Bob was an avid outdoorsman and had a vision for the abandoned CNR lines to be transformed into a multiuse recreational trail. He worked hard to bring this vision to life, which became a reality on February 7, 2007. He was the founding director of the Crossburn Snowmobile Club as well as the Central Nova ATV Club. The next time you are enjoying one of the trails, whether it be on an ATV, while cycling or walking, remember Bob’s vision and the beauty that surrounds you.

Funeral to be held January 4th, 2020, at 11 am at the Bridgewater United Church. Family flowers only by request. Memorial donations may be made to South Shore Regional Hospital or the charity of your choice.  Funeral arrangements have been entrusted to the R.A. Corkum Funeral Home, Wileville. In respecting the wishes of the family, sympathy cards and online condolences are preferred to phone calls and visits. On-line condolences may be made by visiting www.corkumfuneralhome.ca

The family of the late Robert Lowe would like to thank the doctors and nurses of the 4th floor medical unit for their compassion and care during Bob’s time there.  Also for phone calls and emails of condolences.