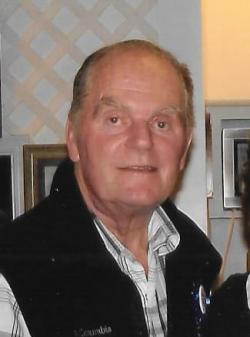 Wile, Roland Lawrence ("Rollie") age 78 of Haddon Hill, Chester, passed away peacefully at South Shore Regional Hospital in Bridgewater on Tuesday, October 8 after a long and courageous battle with Parkinson’s Disease and Cancer.

He was predeceased by a son, David, a nephew Rollie Conrad, and his parents, Laurie and Myrna Wile.

After some 20 years in Toronto where he was a superintendent/supervisor with Duron road works, Rollie returned to Nova Scotia and established "Road Savers Maritimes" at Chester in his native Lunenburg County. In 1978, he started the company single-handedly, working long days by himself doing contract road work with his pickup truck and a melter. Under his direction as President and General Manager, the company prospered and grew and provided employment for a significant number of people in Lunenburg County and elsewhere throughout the Maritimes. Eventually the company expanded to include "Road Savers Ontario" and "Road Savers Western."

Rollie’s passions were his family, teaming his oxen at the South Shore Exhibition, enjoying hockey (particularly the Toronto Maple Leafs), taking friends and family out on his party boat at Mushamush Lake, and country music -- especially Conway Twitty.

Rollie will be lovingly remembered for his love of family and friends, his cheerful disposition, his generosity and his wonderful sense of humour.

Special thanks to Dr. Ann Chaisson and third floor nursing staff at South Shore Regional Hospital for their care and support during Rollie’s final days.