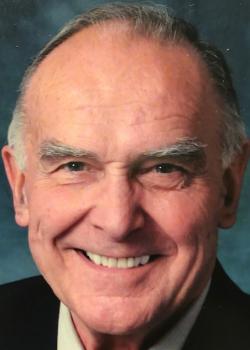 With heavy hearts, we announce the passing of George Mitchell on Friday, August 23, 2019. His illness was sudden and he passed peacefully at the South Shore Regional Hospital. George was predeceased by his wife Eleanor (Goulden) and he was the proud father of Kathryn (John), Patrice, and Anne Marie (Robert). Grandchildren Kyle, Kim (Justin), Ryan, Elyse, Kelly, and Alexander loved him dearly. Little Jacob was his first great-grandchild.

Born in Chester, NS on December 19, 1929, George was the son of the late Ian and Madge (Harnish) Mitchell. George grew up in Chester and is survived by sister Shirley (Gummer) and brother David (Anita), all residing in Ottawa, as well as many nieces and nephews.

Once finishing high school, George joined the Royal Bank and worked with them for 39 years. He held, among other positions, the titles of Loans Manager and Assistant Manager at various Branch Offices, District Offices and Head Office, in over 14 different locations in Canada and the USA.

Retiring from RBC at the young age of 55 and returning to Bridgewater allowed George to spend his time playing golf, curling, enjoying time with family and friends, and doing much volunteer work. For 4 years he was Treasurer of the Hospital Foundation, Treasurer of the Foundation Campaign, and for 2 years was Treasurer of the South Shore Regional Hospital Board. He was also Treasurer of the Bridgewater Kiwanis Club for a number of years and was instrumental in the start of Senior Wheels. He became Finance Chairman of the New Parish Hall Planning Committee Holy Trinity Church soon after.

George looked forward to spending time with his family every summer at White Point and many times brought home the family cribbage tournament trophy. He was always hungry for lobster and prepared many a feast to share. Losing his dear friend Sally in June was quite a blow. He so enjoyed their chats and special dinners out. Apparently George was quite a character known by many around town with his wood-carved walkingstick.Devoted Boston Red Sox and Montreal Canadiens fan he was! He took great pride in his home and loved to garden and putter around his yard. He was generous to a fault. Fairness and honesty were traits he strongly believed in and upheld. Now there is a huge void in our family and "Georgie" will be missed by all of us who loved him so much.

Funeral arrangements are under the care and direction of the R.A Corkum Funeral Home, 2719 Hwy 325 in Wileville where visitation will be held on Thursday, September 12 from 4-6 pm. Funeral service will be at Holy Trinity Anglican Church in Bridgewater on Friday, September 13 at 2 pm followed by a reception in the Parish Hall. In lieu of flowers, memorial donations may be made to the Parish of Bridgewater and Conqueralls, Senior Wheels Association, or the charity of your choice. Online condolences may be made by visiting www.corkumfuneralhome.ca